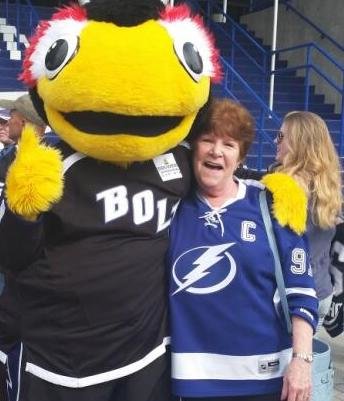 Sandra Anne Wedgeworth, 75, of Port Richey, Florida left this world peacefully on June 11, 2021. She passed in the company of her family after a difficult battle with heart disease. She was a devoted and loving wife, mother and grandmother. Sandy’s life began in Chicago, IL on May 7, 1946. She was one of eight children of Theodore and Anne Gunaka. Most of her working life was spent managing retail stores, which is where she developed her great, off-beat sense humor. She devoted her time to her family, the Tampa Bay Lightning and the Chicago Bears. Sandy was a doting grandmother and fiercely adored her grandchildren. She was always wanting more grandbabies, and no amount would have been enough. Known as “Maw-Maw” to her grandkids, Sandy was happiest when she “had all her babies together”. She was the life of the party, loved to dance, and could hold her own (and regularly did) with her children and grandchildren, who will all miss her dearly. A celebration of life service will be held at Prevatt Funeral Home on Friday, June 18, 2021. The family will receive friends beginning at 12:00 P.M. with a memorial service at 1:00. In lieu of flowers, Sandy would have preferred a more meaningful gift of a donation in her name to the Breast Cancer Research Foundation or the American Heart Association. She is survived by her husband of 44 years; Henry (Cecil) Wedgeworth Jr., Brothers Ted ( Green Bay, WI), and Ronnie ( Midlothian, IL), Sisters Pat (Myrtle Beach, SC), Dianne (Reno, NV) and Maryann (Reno, NV), her children; Michelle Wiliamson of Chicago, IL, Kelly Corneiller of Louisville, KY, her son Trey Wedgeworth of Munster, IN. and her 9 beautiful grandchildren, Courtney Broadhead (Kyle) of Griffith, IN, Taylor Corneiller of Chicago, IL, Jacob Williamson of Chicago, IL, Nyssa, Joseph and Spencer Wedgeworth of Munster, IN, Braden Williamson of Chicago, IL, Jack and James Greipel of Louisville, KY. She was preceded in death by her beloved son Mark Broadhead, brother Danny and sister Carol.
To order memorial trees or send flowers to the family in memory of Sandra Ann Wedgeworth, please visit our flower store.